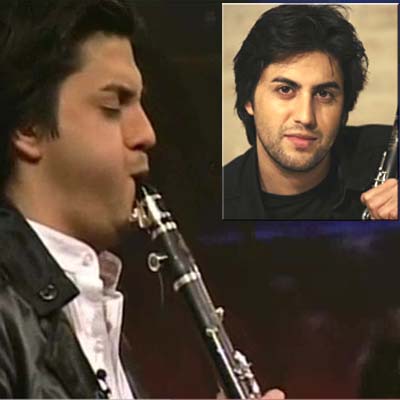 Serkan Çagri was born in "Kesan", Turkey, a town located close to the Bulgarian-Greek borders.
He spent his entire childhood in this mixed culture and was first introduced to the clarinet during
his primary school days. His early contact with the clarinet intensified his involvement in music,
eventually resulting in his receiving the "Special Award in the Best Clarinet Performer’’ Contest
when he was only thirteen. His desire to explore the clarinet led him to pursue music studies at the
Turkish Music Schools: Aegean (Ege), Istanbul Teknik (Istanbul Technical University) and Haliç
(Golden Horn University) respectively. Following his studies he began his professional music career
with Grup Laçin, an ensemble that has performed in both national and international tours.
He was featured as a guest artist in Mercan Dede & Secret Tribe, Kardes Türküler and Yarkin Ensemble projects
at the Montreux Jazz (Switzerland), Jazz à Vienne (France), Rhythm Sticks (England), the Moers Festival (Germany),
Etnomalaga (Spain) etc. He is currently leading his own band on various projects with guest artists,
such as the vocal virtuoso Yildiz Ibrahimova and the renowned Greek clarinetist, Vassilis Saleas.
His academic studies have embraced the research of the Historical Process of Clarinet in Turkey and Europe,
culminating in the publication of several articles. His research also inspired him to write the educational book,
"Techniques of Performing G Clarinet", which can be found in music stores. Through his interest in the capabilities
of the clarinet, Serkan was commissioned to redesign the pitch setting of the instrument for the leading
clarinet manufacturer, AMATI-DENAK, resulting in a new G-clarinet, titled the "Serkan Çagri" model.
Serkan's first album was "My Breath", published in 2005, followed by the 2008 album, Ala".