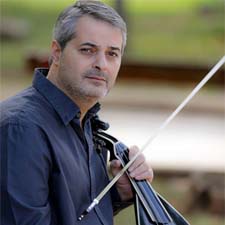 Dιonisis Kornilakis was born on his laurels Heraklion on 13 July 1971.
Grows up in a family with musical tradition and apprenticed for five years
(1980-1985) alongside the remarkable musician Kostas Mountakis and Ross Daly.
Later attending in Byzantine, and European music theory with teacher the Andrea Voutsina.
From very early works in famous shops of Athens and takes part in cultural events.
In 1999 cooperate with Yannis Markopoulos in "ORPHEUS" and after in the project "EROTOKRITOS".
In 2000 starts a valuable collaboration with the group of Nikos Androulakis.
In 2002 he recorded his first solo album titled "COLORS OF THE SUN". Collaborated with
Helen Legaki, Manolis Manouselis Marianna Zorba, Kosta Stafroulidaki, Dimitris Skoula,
Costas Katomeri, Marianna Zorba, Manolis Manouselis, Eva Grigoraki and many others.
Since 1994 dealing systematically with teaching in an effort to pass on to his students
both the art and the psyche that hides substantial contact with the lyre.