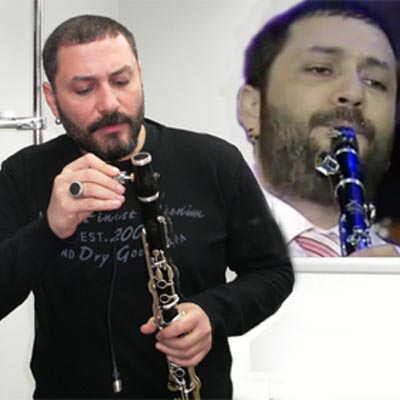 Hüsnü Şenlendirici combines the melodies of his Anatolian heritage (particularly)
his Aegean homeland’s musical traditions) with the jazz sensibilities of the west.
Hüsnü Şenlendirici was born on 12 July 1976, in Bergama, a small town in the Aegean region.
Şenlendirici comes from a family rooted deeply in musical culture. His grandfather,
Hüsnü Şenlendirici, was also a clarinetist, and his other grandfather, Fahrettin Köfeci
and his father Ergün played the trumpet. He started playing clarinet when he was five years old.
He attended the Turkish Music State Conservatory at Istanbul Technical University in 1988 to study music.
He played with distinguished Turkish musicians and bands including Özdemir Erdoğan, Muazzez Abacı,
Bülent Ersoy, Müslüm Gürses, Kibariye, Fatih Kısaparmak, Zara, Kubat, Kayahan, Seda Sayan, Emel Sayın,
Adnan Şenses, Zerrin Özer, Cengiz Kurtoğlu, Candan Erçetin, Fatih Erkoç, Serdar Ortaç, Athena, Izel,
Ayna, Hande Yener, Hasan Cihat Örter, Ilhan Erşahin, Mercan Dede and many others.
Şenlendirici has his own band, Laço Tayfa, which collaborated with the famous American ensemble,
Brooklyn Funk Essentials, to record the album “In the Buzbag”. Şenlendirici made two other
albums with them, “Bergama Gaydası” and “Hicaz Dolap”, before releasing a solo album,
“The Joy of the Clarinet”. He has also played with the “Magnetic Band”, a band put
together by percussionist Okay Temiz, and has recorded and toured with Embrio.
Şenlendirici also founded a quintet called “Hüsnü Şenlendirici and Friends” in order
to carry Turkish music to wider audiences. He performed in numerous concerts
with both of his groups within and outside Turkey. These included concerts
like EXPO-2001 in Germany, Central Park concert within the framework of Mayfest
festival 2002, New York and the concerts he gave, in July 2002,
with his 35 member Laço Tayfa Big Band during Istanbul Jazz Festival.