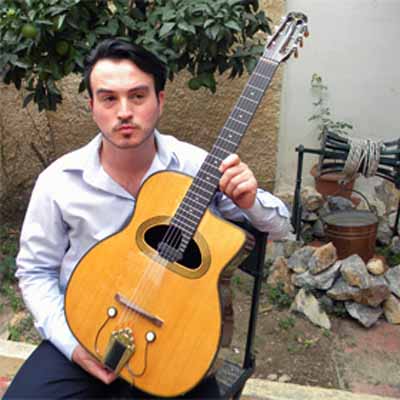 George Patsiotis was born in Athens in 1984.
Is a graduate of the Department of Music Science and Art, University of Macedonia.
She attended Jazz guitar lessons with Makis Stefanidis, Papadogianni Giorgos
and Dimitris Politis. He works in Athens as a music teacher first degree education
and is a member of the gypsy jazz guitar trio Sueños Gitanos. From teen while
the academic music studies, participates in various bands rock music,
with frequent appearances in Athens and Thessaloniki. In June 2006 he founded
the band of Jasm and since then appears and gives concerts all over Greece.
As a guitarist he worked at Regency Casino - Restaurant, while from 2010 to 2012
he taught as a professor of music at Heraklion. It works continuously
with singer Domna Kountouris, songwriters as Michael Konitopoulos
and Flora Chrisou and the conductor David Nahmia.