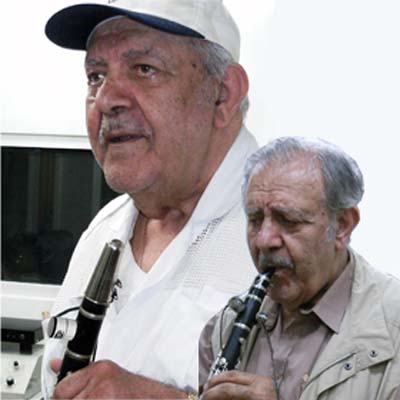 Petros (Petroloukas) Chalkias is a musician and a member of a family
which counts more than 150 years of offer in the Greek traditional music.
He was born in Delvinaki of Epirus in 1934 and he dealt with the art of
clarinet that was a tradition in his family.
Petroloukas Chalkias began his pastime with the clarinet at the age of 11
and he became an apprentice next to Filippas Rountas (the so-called
‘the best clarinet of Zagori’) with the aid of which he also made his
first public appearance at this age. He then goes to Athens where he plays
with his father and makes his first radio appearance. In 1960 he immigrates
to America where he stays for 20 years and spreads the Greek traditional music.
In 1979 he returned in Greece and was located in Athens. He plays in well-known
musical centres, in concerts, he appears in radio and television emissions
and participates in recordings and disks with well-known artists.