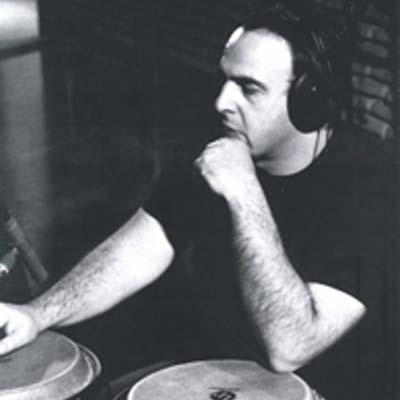 He was born in Chios. He came in Athens and studied drums and theorys.
At the same time he studied Economy and Humanitarian Sciences in the American
College of Greece (Deree College). In the΄80s he participated in pop
and rock groups and and studied Greek crust for one year in Aristeidis’
Moschou Music School of traditional music. In 1991 he studied for two
years drums in `GROVE SCHOOL OF MUSIC' and then in `MUSICIANS INSTITUTE'
in Los Angeles, USA. From 2000 to 2008 he studied classical crust
in the Municipal Music School of Moschato with Kostas Borisis.
He has collaborated with a lot of singers and musicians of popular scene
(Manolis Lidakis, Pantelis Thalassinos, Orpheus Peridis, Abaton,
Morfo Tsaireli, Keti Koullia, Helene Tsaligopoulou, Helene Vitali,
Dimitris Mitropano, Dimitris Papadimitriou, Melina Kana, Lizeta Kalimeri,
Thanasis Gkaifiliaa, Foteini Dara, Trifono, Giorgos Zikas, Sofia
Papazoglou, Vinicio Capossela, etc.) as well as with many forms
of modern music in live appearances (in Greece and abroad) and in discography.
He is a professor of drams and crusts in the MODERN MUSIC SCHOOL OF ATHENS
and in the MUSIC SCHOOL of MUSICAL ACTION where he directs the crusts chorus.