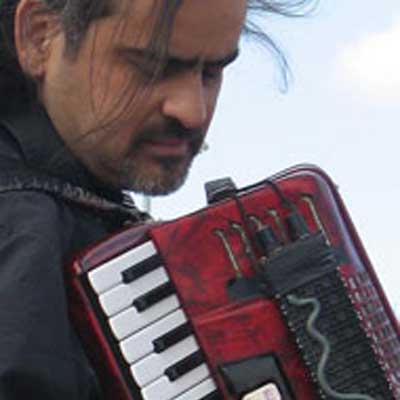 Vassilis Ziakas was born in Athens in 1970. He works professionally
(accordion) since 1990 in many places in Greece and abroad.
He has played with many musicians and bands in the area of ​​Rembetiko,
folk and traditional songs: Jordan Tsomidis, Repanis, Bemba Blanche,
Katerina Skordalaki, El Meya (Algeria). He participate in many recordings
and in various independent productions. He also works as a musician since 1996,
with various theatrical teams as: OMMA Studio, shoe Theatre on the tree,
Modus Viventi, English Theater club, Cirko Cacivache, Inventis, Pasoumi Team,
Bijoux de Kant, MAERZ BUEHNE, Dourgouti Island Hotel Project .
It is participation in the TV serials "I love you love me"
and the cinema in "Espresso movies" and "Wedding mine."
He writes his own songs, lyrics and music,
and singing with bands in different places since 1988.