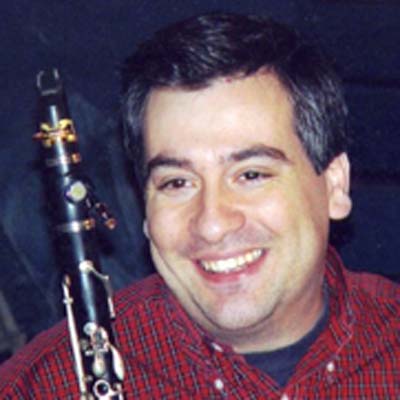 He was born in Athens in 1969. He comes from Stratinista Pogoniou, Ioannina,
where he was introduced to the Greek traditional music, at the age of 11 years.
Qualified in Byzantine Music, he also studied Eastern Music. Parallel with folk
clarinet he also studied other folk musical instruments: kavali, nei, kanonaki and flute.
For years he taught clarinet in Musical High school-lyceum of Pallini. He has collaborated
with the University of Athens, Dimokriteio University of Thrace, the Academy Sibelius of Finland
and a lot of cultural associations in Greece, Germany and France in seminars of traditional music and dances.
He has participated in concerts and recordings in Greece and abroad (N. America, Cuba, Australia, Asia
and in almost all the countries of Europe), in collaboration with the main institutions (Lyceum of Greeks in Athens,
Dora Stratou, Association for the spread of Greek national music - Simonos Kara, etc.), researchers
(Lampros Liabas, Giorgos Papadakis] Nikos Dionysopoylos, etc.) and singers of the same field (Domna Samiou,
Chronis Aidonidis, Kariofyllis Doitsidis, Alekos Kitsakis, Stelios Mpellos, Savvas Siatras, Tasia Vera,
Vasilis Sermpezis etc.). He has worked in presentations and recordings with famous popular singers (Charis Alexiou,
Giorgos Dalaras, Maria Farantouri, Dimitra Galani, Eleftheria Arbanitaki, Lakis Chalkias, Petros Gaitanos, etc.)
and has acted jointly as soloist with big orchestras, such as the Orchestra of Modern Music of ERT,
with Giorgos Despotidis being the conductor. He has written the book ‘Melismata’, as well as a method of folk Greek clarinet.
He teaches in the Music School of Athens and is Artistic Director in the Sector of Traditional Music in the Music School “Filippos Nakas”.