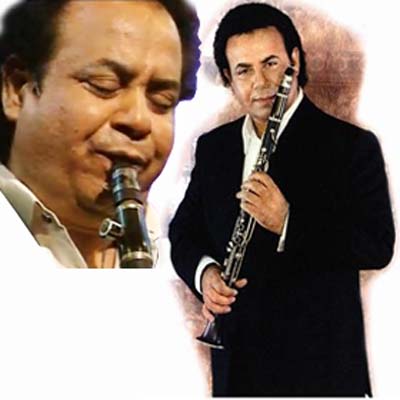 Vassilis Saleas is the foremost clarinet player in Greece. He was born in 1958 in Messologi.
One year later his family moved in Athens as they were searching for a better fortune.
His occupation with music since his childhood was a natural consequence as he was brought up
in a family of musicians. He was only 9 years old when he could play the clarinette ,
and when he became 11 he perfomed in an entertainment area in Patra. His first attempt in
the musical company is a record which was done when he was 14 years old. He is considered
one of the greatest Greek solist players through the years and because of his continuous
study in the clarinette. He has very important moments in his career.He has done very
important cooperations with Dionisis Savopoulos ,with Mikis Theodorakis , with Stamatis
Spanoudakis in the soundtrack of the movie "Stone Years" as well as in the records
"Alexandros" and " Something happens here ". He has cooperated with the most distinguished
Greek artists and he is lovable and acceptable as well by the experts in the international
field of music. In 1996 he creates a record with the great Greek composer Vangelis Papathanasiou..
The last years has performed a lot and with great success in the following festivals:
Kassandras, Chalkidikis, Sunny, Castle Rio, Megaro of music Thessaloniki, Irodio Theatre,
Olympus Festival, Pallais de Sport, etc.. Vasilis Saleas has also performed in a lot of festivals abroad:
Paris, New York, Frankfurt, Munich, Sidney, Manhatan, Torondo, Dubai, Bahrein, Cannes, Sweden, Instabul, etc...
Today , he lives in Athens with his family.