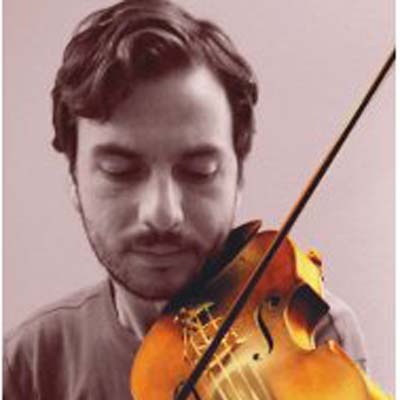 Gregory Laggas born in Tripoli and at an early age began violin lessons
at Attica Conservatory Tripoli where then attended and theory lessons
. A graduate of the Athens University of Music Department. Graduate in
Violin (Attica Athens Conservatory). Also holds a Diploma Byzantine
Ecclesiastical Music (Argyroupolis Municipal Conservatory).
He has participated in many concerts Atticus Odeon Tripoli,
the chamber music repertoire, and as a member of various ensembles.
He was a member of the Athenian Youth Symphony Orchestra during
the years 1998 - 2001 with many appearances in concerts throughout
Greece and Cyprus. Since 2008 he is working in public primary
education as a teacher of music. For years he was a permanent
member of Sed Nove complexes ( music of Southern Italy),
Rempetoven (Greek repertoire folk and blues music forms)
and Ntilmperaki (traditional folk music).
He collaborates with various ensembles Greek folk,
traditional and art music as well as dance groups