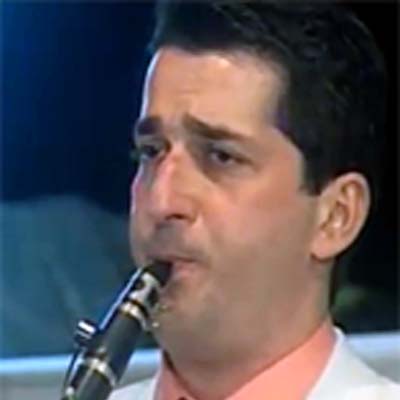 Panagiotis Kotrotsos was born and grew up in Nafpactos, where he also lives with his family.
The love and his taste for the rescue and distribution of popular music, prompted him to deal
from a young age with the clarinet. At the age of 17 he began playing professionally in the region
of Nafpactos with Apostolis’ Zorbas orchestra. He then created his own music band. He collaborates
with a lot of artists of traditional music and has taken part in the recordings of many cds
with traditional but also new songs (with Lampros Skarlas, Giorgos Tzamaras, Vaggelio Christia,
Vaso Charakida, Christos Fotiou, V. Kostoula, Katerina Kapeli, etc.) He has also made tours abroad
in many concerts and dancing parties (N. York, Los Angeles, Baltimore, Pennsylvania, and Melbourne).
He is founder and editor of the newspaper of the Musicians Association “THE NEWS OF ORPHEUS”
and teaches clarinet in a lot of young people.